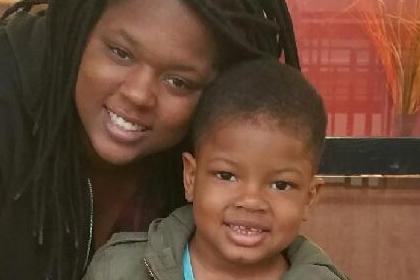 You may have read the story when it happened.  On May 22, 2015, J’Aire Lee, three years old, was found dead on a swing in Maryland. A neighbor called the police and said his mom, Romechia Simms, had been pushing him on the swing for “an unusually long period of time.” That time turned out to be two full days.  J’Aire’s cause of death was found to be hypothermia and dehydration. Romechia was taken to a psychiatric hospital. The death was ruled a homicide. Romechia’s mother, Vontasha Simms,  said her daughter had a history of schizophrenia and had been hospitalized twice in the past few years, but all her pleas to social services and other agencies to help her daughter we met with apologies or silence. Romechia had to face her son’s casket – and the knowledge that her actions caused his death – at his funeral. Then Romechia was charged with manslaughter and child abuse and incarcerated. She spent nearly three months in jail before her family could fight to have her bond lowered, then gather the funds to bail her out, just a few weeks before Christmas.

Two days ago, Romechia Simms stood in front of a judge and accepted a deal where she pled guilty to involuntary manslaughter in  J’Aire’s death, and required her to stay in treatment and take her medication, and be monitored for five years to ensure she is doing so.  She is living with her mother, Vontasha, who I know will ensure Romechia stays in treatment.

But Vontasha is doing more than caring for her daughter.  She is taking the pleas that fell on deaf ears before her grandson’s death to the Maryland State Capital to try and ensure that services are available to the families that need them, and to ensure that no other grandson has to die, and no other daughter has to live with the fact that her mental illness killed him.  It’s called J’Aire’s Law, and Vontasha posts on her Facebook page every morning about her meetings with county and state officials and her phone calls and petition drives.  Vontasha is one driven lady. She’s driven to get enough psychiatric hospital beds in Maryland to meet the demand. She’s driven to get the law changed so that insurance companies can’t kick someone out of the hospital who is clearly unstable, but no longer an “imminent threat.” She’s driven to get family members of adults with mental illness access to their treatment plans and doctors.  I bet she can do it, too.  I hope her work rubs off at the National level, so we can get House Bill HR2646 passed.

Vontasha has a petition where supporters are signing and showing their support for J’Aire’s Law.  I’ve signed it.  I hope you will too. Because no one should have to endure what Vontasha, Romechia, and J’Aire have endured.  Not when treatment is so effective.

Hospitalization How-To (When You Have To)