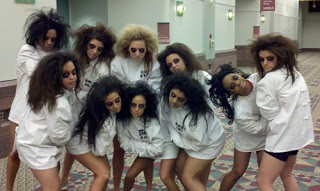 An anonymous poster alerted me to Chicago’s Robert Morris University dance team and their recent 8th place finish in a dance competition.  Their costumes?  You guessed it.  Straight jackets.  (Update 3/14/11: here’s the cached version of the story and picture, as it has dissappeared from the live site) 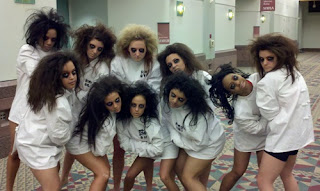 I can’t believe we’re seeing this again, particularly so close on the heels of the fallout from the Waunakee High School dance team performing a similar routine.  RMU Dance Team Coach Julie Haller is quoted as saying the team gave, “a very sharp performance.”  Sharp indeed.  The image of the team in straight jackets, blackened eyes and wild hair pierced right through  my heart.  Of the 10 young women on this team, statistically, at least one of them has suffered mental health issues in their lifetime.  At least two of their parents have.  Their third leading cause of death?  Suicide.

My name is Chrisa Hickey and I am a resident of the Chicagoland area, as well as a mother of three young adults, one of which is considering Robert Morris University for his degree when he completes his general education at our local community college.  I am writing to you regarding your recent dance team victory at Nationals, as described in the press release on the Robert Morris University website.
First off, congratulations on the victory.  I’m sure these young women worked hard to make it to Nationals and to come in eighth in the nation.  I have a question, however, about the routine and the choice in costume in particular.  Why straight jackets?  Why wild, disheveled hair and blackened eyes?  Why a routine that, at best makes light of and, at worst pokes fun at the mentally ill?  When did it become ok in our society to satirize a serious national health concern for entertainment?
I’d like to tell you a story about my middle son, Tim.  Tim is 16 years old.  Tim was always a little different than other kids.  It was hard to pinpoint just what was different, but there were signs all throughout his early childhood.  His pre-school offered speech therapy and chalked up his unusual and unprovoked rage and fleeing behavior to Autism. Testing by a Neuropsychologist and the school district added diagnoses of Expressive-Receptive Language Disorder, Sensory Integration Disorder, and Developmental Delay.

Speech therapy gave way to a full-time special education class, which gave way to the first of five therapeutic day schools, first for Autism, but after we engaged a child psychologist and, at her recommendation, a child psychiatrist, schools for children with emotional disturbances. But it wasn’t until age 11 after weeks of uncontrollable rage, when his psychologist sat me down and gently explained that my child was psychotic and needed to be hospitalized, did I realize what she’d been trying to soft-shoe to me for nearly a year. Tim did not have an Autism Spectrum Disorder. He had a mental illness and needed hospitalization and, very likely, medication. As I sat, stunned, she gently told me, “he will likely be hospitalized several times.” I brushed that notion off at the time. But between that first hospitalization March 2006 and June 2009 there would be 11 more, accompanied by 27 different med combinations, daily therapy, and refinement of his diagnosis from Bipolar NOS, to Bipolar 1 with psychotic features to Schizoaffective Disorder, Bipolar subtype. Tim was actively psychotic – hearing voices, plagued by delusions – and alternately manic and depressed for much of that time, if not all of his life. It was just much more noticeable since his speech had gotten to the point where he could explain what was going on in his head.

In June 2009 Tim was granted an Individual Care Grant from the state of Illinois, a unique state program that provides funds for intense community based or residential services for severely mentally ill children. It was a month before his 15th birthday and, after years of talk of suicide (and one attempt) alternating with violent, destructive rage, we decided he needed this type of treatment. Either my husband or I had been with him (except for the 5 hours a day he was in school, when he went to school) every hour of every day since he was four. We were all exhausted. Our oldest had spent as much time out of the house as possible, and our daughter mostly hid in her room, understandably diagnosed with PTSD in 2009.

Tim went to residential treatment in August 2009, and he resides there today. Through intense treatment, a very predictable and rigid schedule, and Clozaril (we had several psychiatrists, including the head of pediatric psychiatry for a large hospital in the Chicago area tell us we were down to that or ECT), Tim is pretty stable today. His voices are never gone, but he has learned how to block them out (the meds help). He does cycle, as regular as a calendar, experiencing psychosis and depression in mid to late winter, and psychosis and mania mid fall, yearly for the past three years running. He is still plagued by anxiety that feeds his psychosis, but his personality is starting to show again. Tim will most likely never be independent, and we understand and are preparing for that. But he can and will have a life he can enjoy and be proud of, thanks to the difficult choices we’ve made today.

Now imagine Tim sitting and watching your dance team perform their routine, alongside his brother, a soon-to-be RMU student.
1 in every 10 persons in the US suffers from a mental health condition, including teens and young adults.  But tragically, less than 40% of the teens and young adults that need mental health treatment ever receive it.  And the primary reason for that is the stigma associated with having a mental illness.  How many people saw your routine?  How many of them are friends and family of you and the dance team?  And how many of them do you think would tell you how hurtful and stigmatizing the routine was?  I can tell you how many would tell you – none.
Now let me ask  you one more question.  Would you have done a routine dressed as the stereotype of homeless persons?  In black-face?  As cognitively disabled persons?  No.  Of course you wouldn’t.  Because it’s insensitive to poke fun at the homeless, different races, and persons with mental disabilities.  It’s also not ok to perpetuate the false stigma that persons with mental illness are dangerous, disheveled, and bizarre.  Because, statistically, one of the members of your dance team is or will be one of them.
I have posted this letter on my blog as well.  I hope to hear from you so you can understand my point of view.  I’d also encourage you to read the open letter to Waunakee High School coach Erin Cotter on my blog, written by a 15 year old girl with a mental illness, written after they performed a routine similar to yours.  The Principal of Waunakee High School has responded by increasing mental health education at WHS.  I hope RMU and, specifically your dance team, will do the same. 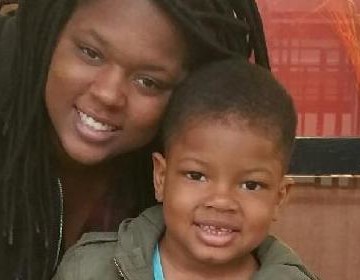