Is It June Yet?

I am so ready for this month to be over.

It’s been quite a May so far for the family.  It started out with a happy change – I switched jobs.  I left a major retailer and went to work for a smaller company with better culture, better career opportunities, and better benefits, albeit with a longer commute.  But I was happy to switch, and I’ve been settling in with my new job and new co-workers and responsibilities.

We’ve been agonizing over what do to about Tim when he turns 18 this summer, as he will age out of his current residential placement.  We talked about bringing him home, but after much talk as a family, we all decided – Tim most of all, interestingly – that another placement closer to home, where we can work on transitioning him home with more home visits, was a better idea.  Tom and I toured several and then took Tim to see one just 20 miles from home.  And he loved it.  Great location, nice campus, similar group home to where he is now, and a great vocational program.  So Memorial Day weekend we check  him out of ODTC, he stays home for the weekend, and then he checks in to the transitional unit at Allendale. He’s excited to go, but will miss the staff and kids in his group home.  Many of the boys he’s been there with for the past few years are also aging out and moving on, so I think that is making the transition a little bit easier.  At least, I hope so.

Then, this past Sunday – Mother’s Day – The Girl and I were doing some yardwork.  It was a beautiful day, clear, sunny, and we pulled weeds, planted some plants, and  hung out with the dogs in the sun.  I wanted to get the log holders that Tom built for us to hold firewood close to the house during the winter out back behind the shed for the summer.  They are long, built out of 2X4s, and awkward, but not particularly heavy.  The Girl picked up one side, I picked up the other, and we started slowly carrying them across the yard to the shed.  She looked tired, so I told her we could put them down as many times as she wanted, moving just a few feet at a time, until we got them there.  About halfway across the yard she put down her end, put her head back, and said, “I’m dizzy.”  Her eyes rolled back in her head and she swayed.  I told her she needed to not hold her breath as we moved the log holder, and she said she needed to go inside to use the bathroom.  I waited outside for her – 10 minutes – and she came back out, a little pale, but better.  I asked if she had thrown up.  She said no, and we picked up the log holder and began moving it again.  We got it to the shed and she swooned and said, “I think I need some lunch.”

We went in the house and I sat her on the couch, thinking she’d gotten a little overheated.  She had eaten breakfast, but it was about 2 PM so we made a bowl of chili and got her a glass of water.  After 10 minutes of holding a spoon at half mast, she put it back in the bowl and keeled over on the couch, her eyes closed.  I figured she was trying to get out of yard work, but she complained, “I’m so tired.”  Her eyes were just half open. I started to panic. She’d never behaved this way before.  I started thinking, maybe she’s having a stroke. I asked her to get up and walk across the room to me, and she meandered, weaving her way towards me, eyes mostly closed. I asked her the alphabet, and she slurred her way halfway through.  I called Tom – on his way home from a track meet in Madison – and said, “something’s not right.”  I was thinking we might need to go to the hospital, and  he agreed.  So I scooped her up, plopped her in the car, and headed the 1/3 mile from our home to the local ER.

Fast forward six hours. The Girl was in an ambulance from our local hospital to Children’s ICU, about 22 miles away, unable to stay conscious. Unable to speak. Unable to open her eyes. Unable to sit up.  Blood work and a CT ruled out stroke and toxins, but since she was recently in a psychiatric outpatient program, an overdose could  not be ruled out, even though Tom got home, tossed her room, and checked our locked up rescue meds for Tim.  All accounted for, nothing unusual. 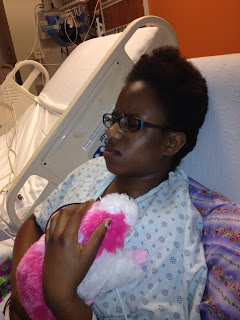 The Girl, sick of the hospital.

Fast forward three days. Three EKGs, an MRI of her head, Ultrasound of her neck (to check blood flow to her brain), and an EEG later, and we have a diagnosis.  Frontal Lobe Seizure Disorder.  Myotonic seizures, which are seizures without the limb movements of what people classically know as Epilepsy.  The strange part is she was having them while in the hospital, before we all realized what they were, when she sat up too long. Her face would contort, just on one side, and it would be hard for her to speak.  After a day of anti-seizure meds, she could walk and sit up without an episode, and they discharged her last night.  We are keeping her home for a few days, watching her like a hawk, irritating the living hell out of her.

Tom sat on the patio last night, very pensive.  He said, in hindsight, perhaps some of the behaviors we’ve seen over the past year or so were actually seizures.  She would space out. Even her teachers commented on it.  Frontal lobe seizures are known to change behavior.  Hmmm.  It would explain a lot, huh?

This Saturday we walk as we do every year for NAMIWalks Milwaukee. The Girl is coming with us – not walking, just observing – but she wants to see everyone, and Tim wants to see her.  He’s been nervous knowing she’s in the hospital.  I’m looking forward to it as I do every year. Ryan Grant is the honorary chair again this year, and he now recognizes Tim on sight, which is a huge thrill for Tim and, frankly, for me.

Next week we start the big move for Tim.  I’m hoping for something totally uneventful, with no more excitement than disgust at the condition of his wardrobe.  🙂  Cross your fingers for us!

Turning a Stigmatizing Experience Into A Positive

Turn And Face The Strain