We have a date – August 24. That’s when Tim can be admitted to ODTC. Between state budget issues (like not having one), and good old fashioned bureocracy, it will be nearly 50 days between getting the ok to admit and actually getting admitted. Mind you, none of the bureocracy was ODTC’s fault.
Today Tom and I start the chore of cleaning up his room. Here’s how it looks now: 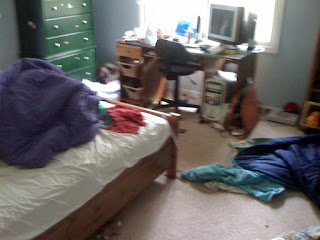 Be glad this blog doesn’t have smell-o-vision, because it smells like urine, sweat, and rotten food. It’s hard to tell, but there’s even a moldy bag of hot dog buns he pilfered on the desk.
Tim’s confused as to why he’s in the hospital. In times past, we tried to handle his slide into psychosis at home, and didn’t get him into the hospital until he’d collapsed into violence, vandalism, or run away. We didn’t let it get that far this time, and he’s angry that he was admitted without being in handcuffs first. He doesn’t understand that we’re trying to prevent law enforcement intervention.
I talked to him on the phone this morning, and now I feel guilty, and I’m angry. He’s good at making me feel both. He hates being indoors all day, and now he’s in a locked ward. And I wonder if we did jump the gun, getting him into the hospital when we did. I told him I love him, and he sniffed and said, “yeah, ok.” I hung up and cried.
Then I look at his room, and it irritates the shit out of me that we have to live with someone who thinks pissing all over and giving fruit flies a place to breed is acceptable behavior. This is the third time this year we’ve had to clean up human urine and fumigate. The carpet is just about on its last legs. I mean, how much soda and piss can a carpet absorb before it simply falls apart? The furniture has gouges in it. There are holes in the walls. The door is completely smashed. What the hell did I do to deserve this? I had someone tell me last week that God doesn’t give us more than we can handle. I wanted to punch her in the face.

One Level At a Time