The Packers are playing the Bears in this weekend’s NFC Championship game.  Tim is a staunch Packers fan mostly due to Tom indoctrinating him from a very small age.  Of course, meeting his idol, Greg Jennings 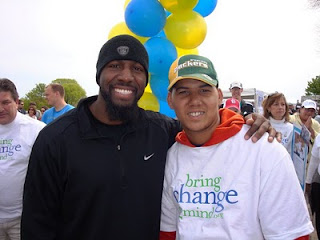 game – never misses a one.  He loves watching the players move up and down the field, he can name most of the starters, and he knows who the coach is.  He doesn’t always know what the score is, or who has scored.  He just likes watching the motion of the plays, one rhythmically after another.

This is sort of like Tim’s fixation on movies.  Tom thinks Tim likes the movies because Tim’s favorite food is popcorn, but I suspect it’s for the same reason he likes football.  He’s particularly drawn to action movies, with lots of car chases and things exploding.   It’s constant motion, back and forth across the field, and he can watch the same action film again and again, not caring that he knows exactly what will happen.

When I ask Tim why he likes action movies so much he always says, “I don’t know, I just do.”  But I suspect it might be a sort of passive stimming that soothes him, the way rapid hand-flapping might for an autistic child or rocking back and forth soothes nerves for some.  The motion and rapid change of scene and noise and adrenaline helps keep him out of his head, which is a dangerous place to be stuck if you hear others talking at you 24/7.  In any case, it’s one of the things Tim does routinely that is a type of socially acceptable stimming.  Sometime in the next few weeks I’ll blog about his obsession with gum.  In the meantime, Go Pack!