I was newly married, new mom, sitting at home from work with a 103 degree fever when the verdicts came in around 3 PM on Wednesday, April 29.  I sat on my couch in Southern LA County drinking ginger ale and popping tylenol like M&Ms when the news broke in to say the verdicts were coming.  When they were read, acquitted on all counts, I was shocked.  I’d seen the video.  Everyone had.

But I wasn’t afraid.  Yes, it was unfair, in my mind. It was unjust.  And I knew there would be commentary and comment about the unequal measure of justice handed out to Black victims for days and weeks to come.  I never fathomed what I’d see, live on the news, just 25 miles from my home, a few hours later.

Over the next several days, Los Angeles was a war zone.  I couldn’t return to work in Carson. By Friday, the rioting and fires had spread from LA to Compton and Long Beach, and my office was right between the two.  My home went from being 25 miles from the violence to less than 5. I packed my car with photographs and a few sentimental items. The entire county was under curfew from sundown to sunrise. 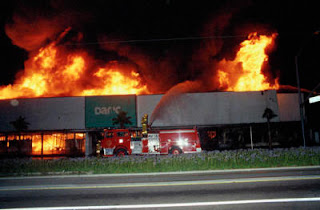 Long Beach, April 30, 1992 Photo by James Drew/AP
My parents, another 30 miles south of my home, pleaded for me to bring Wonderboy, just 18 months old, and come to San Diego with them for the weekend, to get away from the smoke and ash and tension.  I was still running a fever, but I loaded up the car, pleaded with my husband to leave work in North Long Beach, close to the rioting, and come with, but he decided to stay, defend his place of employment if needed, and look after our home.

When Wonderboy and I returned home three days later, order was beginning to be restored, but I was still frightened.  I’d never felt unsafe in Long Beach or Los Angeles for that matter.  But everything changed for me that day.  LA was no longer a sunny mecca of opportunity.  It was dangerous, impersonal, unfeeling, and unwelcoming.  We left Long Beach in 1997 with a bad taste in our mouths.  We hated LA.  I can’t say the riots were the catalyst for that disdain, but I know that I never felt positive about LA again after that terrifying week.  I’d like to know that things have changed; that the racial tension that led to the riots has subsided.  But I’m not confident they have.  Rodney King, the victim at the center of it all, implored us all to get along.  One day, I hope we can honor his words.

Time Is (Not) On My Side