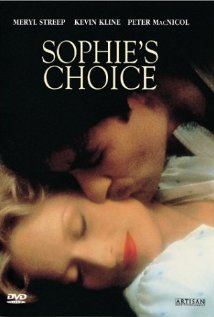 I watched Sophie’s Choice the other day.  It’s an amazing movie of a tragic and painful story and while I admire the film it’s one of those I have to steel myself up to watch because the story and subject matter, World War II and the Nazi concentration camps.  But the other side of the story is Sophie’s relationship with Nathan, the man who saves her life (she says) when she was starving and anemic, trying to restart her life in New York after the war’s end.  Nathan is a brilliant and flamboyant character, full of charm, energy, passion, and, all too often, rage. It isn’t until nearly three quarters of the way through the film that we learn that Nathan’s expansive range of emotions is due to his being diagnosed with Paranoid Schizophrenia, and self-medicating with alcohol, benzos, and cocaine.  I’ve seen the film two or three times before, but it wasn’t until this viewing, a few days ago, when I heard a line I didn’t recall hearing before.  At that three quarters point Nathan’s brother calls Stingo – the other main character in the film, friend to Sophie and Nathan – to tell him of Nathan’s condition.  He explains that Nathan was a brilliant child, and much was expected of him.  But at the age of 10, he was diagnosed with Schizophrenia.  And that’s what caught me.  At the age of 10.

The book is set in the late 1940’s New York, and the idea that a 10 year old child would be diagnosed with Schizophrenia at that age, at that time, is practically unheard of.  I was intrigued, so I researched the author of the book the film was based on, William Styron.  He was a Southern gentleman who won many awards for his writing, but more importantly, both he and his father suffered severe depression.  Styron wrote a memoir about his darkest depressive time, titled Darkness Visible.  I will be looking for it soon to add to my reading list.  But still, this seems only part of the puzzle.  When Sophie’s Choice was published in 1979 it was still common for doctors to think, one, that children could not suffer from mental illness, and two, that Schizophrenia was the result of an overbearing, unaffectionate mother.  How could Styron conceive of creating a character that broke at least one, if not both of those conventions?

I read a little more, and stumbled upon an academic book that analyzes all the writings of William Styron.  In the novel, Sophie’s Choice, there are several advance references to Schizophrenia before Nathan’s brother informs Stingo of Nathan’s condition, even one passage where the commander of Auschwitz states, as a sort of joke, that the Jews give them “all schizophrenia, especially me.” Sophie is described as having a “schizoid mind.”  And reading this, it hit me.  The condition of Schizophrenia – and the idea that it is a the inability to hold the line between logic and madness – was a sort of slur inferring weakness of character.  Even Nathan, as brilliant and creative as he was, was too weak to refrain from the self-medication that aggravated his condition to the point of paranoia, violence and, eventually, suicide.  And it saddens me that an author, touched so deeply by mental illness himself, would not correlate his crippling depression and other conditions. It’s almost as if mental illnesses have a caste system.  And, 30 years later, I don’t think it’s much different.  But more on that tomorrow.