Perfectly Broken Yet Stronger Together 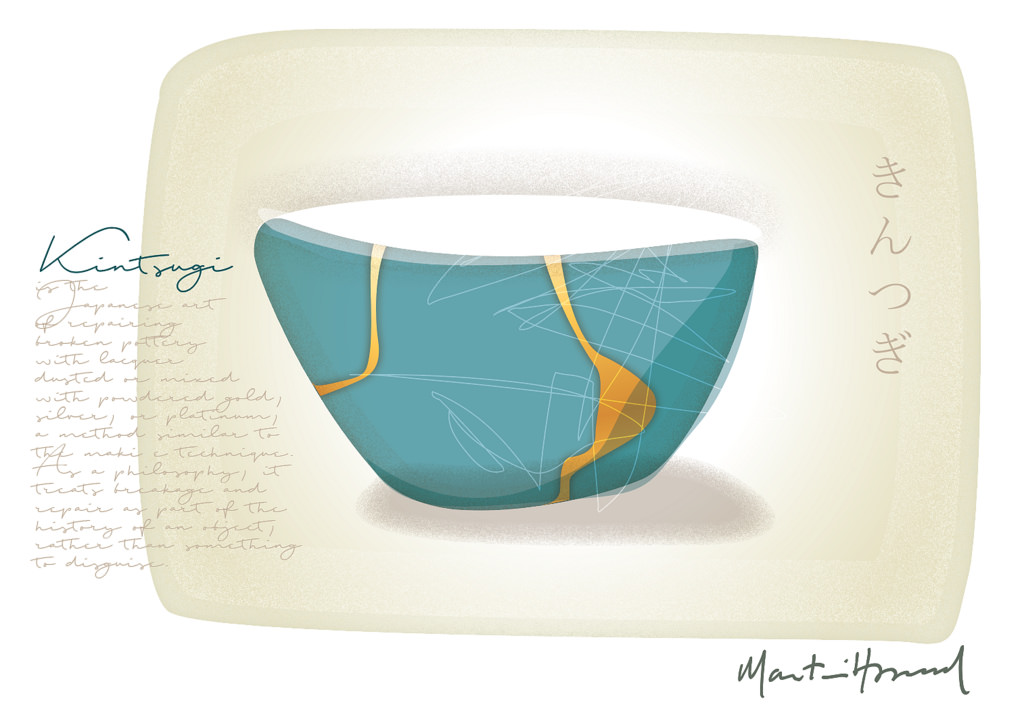 It’s taken me a few weeks to write a post about attending this year’s HealtheVoices. This is the fourth time Janssen has hosted this event and I am blessed to have been invited to attend all four times. Usually I come home full of enthusiasm and joy at spending such an amazing weekend with so many dedicated advocates and inspirational people.  This year was an emotional roller coaster for me. But before I tell you about that, let me tell you about some of the people I met and things I learned. 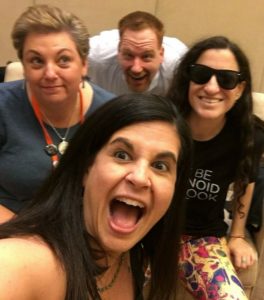 That big mouth belongs to AnnMarie.

Everyone needs a bunch of bozos in their tribe, and these are by far the best bozos anyone could ever ask for. Each one is funny and supportive and goofy in their own way, and I love them like family.

AnnMarie Otis is not only a breast cancer survivor, she’s the driving force behind Wisdo, an online community that bring people in all types of situations together to help learn from and support each other. She is the most positive, real, funny, no-nonsense person I know. I’d walk through traffic for her, and I know, she for me. She’s the bozo in chief – the instigator.

Gabe Howard is a giant ginger and the best bipolar blogger and podcaster there is. He’s real, he’s raw, he’s engaging, and he can be a goof, especially around these broads. I love him because we can debate each other on the edgier issues of patient vs caregiver, and still hug it out when we’re done.

Michelle Hammer lives with schizophrenia. Check that – she THRIVES with it. You may have seen her and her awesome art at SchizophrenicNYC, or selling her pins, posters, shirts and other art around New York City. She’s unapologetic, irreverent, and fierce. She co-hosts a podcast with Gabe called – get this – A Bipolar, A Schizophrenic, And A Podcast. I can’t listen while I drive anymore. It’s too funny. 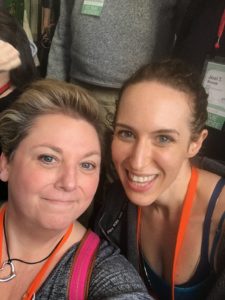 I learned that it’s ok that I didn’t understand what was going on with Tim for all those years when he was little, before his first suicide attempt. Rachel Star always cares about me as a mom of someone with schizophrenia and I love our talks because we remind each other of what our mom and our child deal with in living in a family touched by mental illness.  I also love that Rachel loves Tim, and he loves her right back. 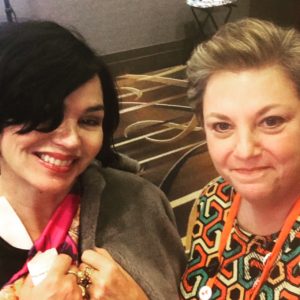 Karen Duffy was the keynote speaker Friday night. She is an actress, writer,  and former MTV VJ who joined our tribe this year. She lives with sarcoidosis which causes chronic, often debilitating pain, but she weathers it with humor and a resilience that is not only awe inspiring but enviable as well. She’s written two books about living with chronic pain that are now on my nightstand. 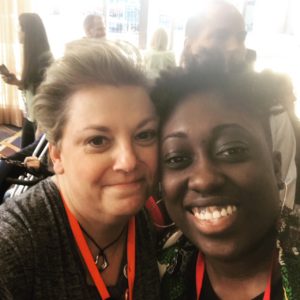 This beautiful soul is Imade Nibokun who writes Depressed While Black. Her quiet strength became an awesome roar as the weekend progressed. She has an important story to tell and an important perspective to share. I feel honored to count her as a new friend and tribe member. She taught me a lot about depression from her perspective, and I feel blessed that she shared it with me. African Americans have a completely different relationship with stigma, and she is working to change that. 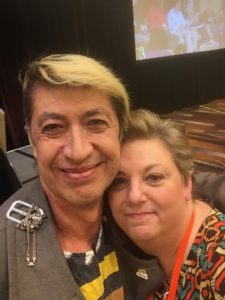 I absolutely fell in love with this man. Jesus Heberto Guillen Solis is a long-term HIV survivor that runs a support group for other long-term survivors. This was his first year at HealtheVoices, and I feel like the experience was richer for having him there. He is a caregiver as well as a patient, and I learned so much listening to him talk about the complications of being a person with a disease as well as caring for someone with it. He also cares for his mother, and after hearing stories of their lives together, I can’t wait to get back to San Francisco to meet her. Oh – and you MUST listen to him sing. It’s amazing and moving. If I can find the video of it online, I will post it here. He wrote a song about surviving that had us all in tears. 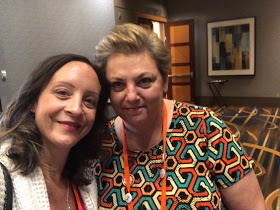 What can I say about Jen Campisano? She’s an inspiring mom. Cancer and sarcoidosis survivor. Confidante. Friend. My life was incomplete before I met her, and I’m grateful that we get to see each other at HealtheVoices every year. My raving has NOTHING to do with the fact that, as an exercise at one of the sessions, we stared into each others eyes for 60 seconds straight. Ok – it might.

I could go on and on about the people I met and what I’ve learned from them, but I promised to talk about what shook me.  So before you stop reading, I’ll move on to that.

On the afternoon of day one of HealtheVoices, there was a panel discussion entitled, “The Power of Resilience: Strategies for Thriving in the Challenging Situations We Face.” Among the panelists was Kenzie Libbesmeier, an amazing young woman who lives with several autoimmune diseases. Kenzie and I have gotten to know each other over the past few years, and – probably because she’s about Tim’s age – I feel somewhat motherly about her. Earlier this year we thought we were going to lose Kenzie when she spent quite a while in the ICU in an induced coma. It was amazing that she was well enough to travel to HealtheVoices at all this year, and I looked forward 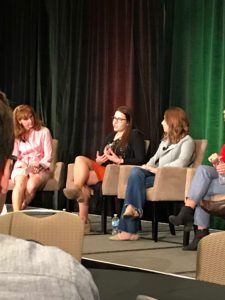 to her talk on the panel.

Kenzie opened up about several exceptionally personal things. She has medical PTSD now, understandably, from the traumatic ordeal she suffered earlier this year. After talking about how scary it was to not understand what was happening to her, she decided to tell us a story she hadn’t told publicly yet. She explained how, while in ICU, sedated and restrained, she had a moment of peace where God gave her a choice, to stay or leave – die, basically. God showed her things that could be in the future – marriage, children, career. She doesn’t remember choosing, but she did stay, and woke up in the ICU.

That was incredibly emotional, but what shook me to the core was Kenzie discussing the arguments since with God, mad that he didn’t tell her how hard it was going to be to stay – the pain, the fear – and she said, “I made the wrong decision. But for some reason, I chose to stay, and I need to keep choosing to stay.”

We had a break after that – mercifully – and I went to my hotel room, my ears ringing, the hair on the back of my neck standing on end. By the time I reached my room I was hyperventilating and nauseated. It took me a few minutes to realize I was having a full blown panic attack. My vision was clouded, but I was flashing back on times when Tim begged to die, screaming and spitting and kicking, as I tried to get rescue meds into him while we waited for the paramedics. I flashed on sitting next to an ER bed as he screamed that he hated his life, hated me. The PTSD I thought I had worked through in therapy was back with a vengeance, and I began to sob, completely uncontrollably.

I had the where-with-all to post to Twitter that I was struggling because I couldn’t recall anyone’s name at that point, but I knew my friends would be alerted to my post. They came and helped me through the panic, and, after I was past the flashbacks, Kenzie reached out to me and we made plans to talk it through later that evening. Which we did, snuggling on a couch. 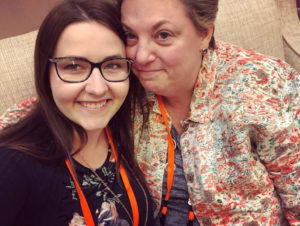 Me and Kenzie, after my good cry, and our snuggle.

Kenzie calls me, “perfectly broken.” When I first heard it, I felt upset, as if she only saw me as damaged. But the more I thought about it, the more I realized what a compliment it is. I AM broken. Raising Tim has irrevocably damaged me. But rather than remaining in pieces – as would absolutely be my understandable right – I chose to use my broken-ness to fight for my son, my family, and families like ours. If I had never been broken, I wouldn’t know how strong I could be. Like Kenzie, I CHOSE to be who and what I am. I am kintsugi. I display my damage, gilded with the strength of that imperfection. Each one of these people I’ve written about are a glistening joint in what holds my pieces together. 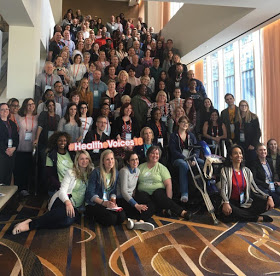 122 Amazing advocates, and the team from Janssen.

Every year, this conference renews and inspires me. This year, it also made me introspective, on why I continue to advocate, and why I continue to write. I realized I AM still – and will always be – broken, but that doesn’t mean that what I do doesn’t have value. Of all the things I could have taken away from this year’s HealtheVoices, that is by far the  most significant and profound. I was surrounded by an entire conference of perfectly broken people. Individually, we are strong. Together, we can and do move mountains.

Note: Janssen Pharmaceutical paid for my expenses to travel to and attend HealtheVoices. My reflections, words, and comments are not sponsored, however, and are my own.