Tom has been making a flurry of phone calls and doctor’s appointments over the last several weeks.  After two failed attempts to get Tim into the cardiologist for the echo cardiogram his doctor wanted, he finally went in last week and got it accomplished.  And when I say failed attempts, I mean failure of epic proportions   Tim just doesn’t refuse when he’s scared / nervous / irrational about why he doesn’t want to see a doctor.  He announces it with gusto.  Tom has tried twice since October to get him in for the echo.  The first time, Tim refused to go and paced / talked to himself / shouted and swore with arms flailing.  The second time, he picked up a microwave oven and threw it to the floor.  When he was finally calm enough – days later – to talk about why such a violent refusal, he said that the sticky pads they put on his chest for the EKG would rip his skin off, and there was no way he was going to let that pain happen.  I explained that the echo was an ultrasound – and what an ultrasound is – and there were no sticky pads involved.  Why oh why didn’t I think about this before he damaged kitchen appliances?  So he went.  No word on results yet, but it’s the holidays, so we will let it slide until next week.

Getting an EEG seems to be about as easy as getting nuclear launch codes. Tom has called several neurologists all who refuse to see him because they don’t treat mental illness.  Uh, no shit.  We’re not asking you to treat him, just give him a damn EEG and send the results to his shrink.  It turned into this circular argument akin to a Laurel and Hardy routine:

“I’m not asking you to treat him, just run an EEG that we can share with his psychiatrist.”

“What’s the EEG looking for?”

“But we don’t treat mental illness.”

“I’m not asking you to treat him, just run the damn EEG.”

You get the picture.  There’s a lab near us that will run one if the shrink writes an order.  So we’ll try that approach after the holidays.

Finally, we got the pdoc that treated him before he went to residential to agree to write up the psych eval for guardianship.  Again, you wouldn’t BELIEVE how many doctors either won’t or can’t.  The pdoc from his previous residential would but couldn’t because she’s not licensed in Illinois, just Wisconsin.  The pdoc from his current residential won’t because it’s a conflict of interest in his mind, since he’s the doctor at the residential that currently has him.  Tom had to do an end run around his old pdoc’s staff to get to him to even talk about getting his help because they wanted us to do an intake appointment with the doctor before they’d even discuss it, since Tim hasn’t seen him regularly since he was 14.  Instead, now, he’s agreed to read the paperwork between now and then and write up the form for the court.  Of all the pdocs Tim has interacted with in the past decade, Dr. D. still knows him best, so we are very happy about this development. Now to submit paperwork – and money to the court, and get this done.

I hope you all had a pleasant holiday.  Tim’s with us all week and is in very good spirits, which is a blessing.  His obsession with sock monkeys was fed by this gift from Santa – yes, those are 6 foot tall footie PJ’s! 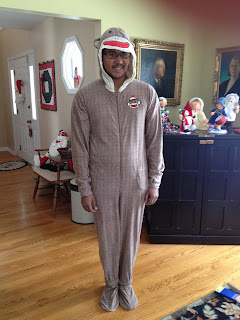 Women In My Corner