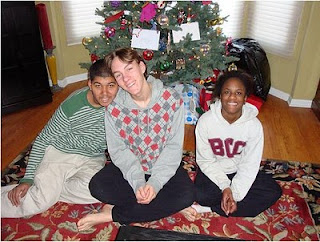 Tim goes back to ODTC later this morning. We had a pleasant few days together as a family, even with a foot of snow on the 26th. We went to the movies Christmas Day – never done that before – and the kids really enjoyed that. Or oldest son made a real effort to be home every day Tim was here to spend time with him, without any suggestion from us, which is great. I know he and our daughter were nervous about Tim coming home, but except for some minor issues with Tim and personal space (he wants you out of his, but has no problem invading yours), we were drama free, which is WONDERFUL.

My parents, who Tim adores, talked to Tim before he came home and said that for Christmas, they wanted Tim to relax and enjoy his family, with no drama. Tim told me last night to tell them that he had no incidents – no rage, no running away – while he was home. He was very proud of himself, and we gave him lots of praise, so he was beaming when he went to bed last night.

Oh – one minor incident – on the 26th, Tom handed Tim the blister packs of his meds (the RTC packages his days meds in blister packs to send home) and Tim said that one of his Clozaril pills was missing. We had an extra day’s worth in case of weather, so Tom gave him another pill and didn’t think much of it….until our 55 lb goldendoodle started staggering around the house, drooling an hour later. I flipped out, not knowing what was wrong with her, and called the vet for an emergency appointment. When I told Tom (who was in the garage working on son #1’s car) about the dog, he came in to look at her and said, “Tim told me one of his pills was missing….I wonder if he dropped it and the dog got it.” After some gentle prodding, Tim fessed up that he had dropped the pill and, rather than look for it, just said it was missing. I rushed the dog to the vet who consulted with a veterinary poison control specialist and was told that Clozaril is only toxic to dogs if it’s more than 50 mg per kilo, and considering the size of the dog and the 1 pill (100 mg), she’d had only 3.5 mg per kilo, and would be fine after it wore off. But….she spent 18 hours in a drooling, stumbling, incontnient stupor, and I paid $164 for a vet consult. Fun times.

The roads are clear and we’re expecting just flurries on and off today, so Tom is driving Tim back at around noon today. I’m sad he’s going but I’ve been on a sort of heightened alert for 4 days, so it will be nice to be able to relax. We went back to all our normal precautions while he was home – locked kitchen cabinets, locked bedroom doors (everyone but his), just to set him up for success, and we were so out of practice I locked myself out of my own bedroom twice.

I hope you all had a pleasant Christmas,and a very Happy New Year to you!

The Lesser of Two Evils