We got Tim successfully moved from OTDC to his new RTC the week after Memorial Day.  It was quite the Memorial Day Weekend.  I drove up Saturday and picked up Tim and a mountain of crap so high I couldn’t believe he had it all in his room.  We checked him in to ODTC just shy of three years ago with an oversized duffel bag and an art easel.  He checked out with said bag and easel, plus fishing gear, a moving box of assorted bits, a bean bag chair, and SEVEN garbage bags of additional clothes.  I packed it all into my little car and we drove home without a view through the rear window.

When we got home I had him dump it all into the family room.  There was no way I was going to let him take that mess upstairs to his room to squirrel it away or, worse yet, spread it out all over the floor, bed, desk, and dresser.  I sat right there and sorted through all of it that afternoon.  One saving grace is that it was all clean.  Whether it was Tim having an epiphany of responsibility or the RTC staff who thought it was a good idea I don’t know, but Tim did all his laundry the night before I got him.  That made the task a bit easier, since I didn’t have to follow up the sorting and sifting with washing and folding.

So what in jeebus’ name was in a box,  SEVEN garbage bags and a very large duffel?  Here’s the rundown – Tim’s commentary in parentheses ():

By the end of the day, Tim was back to one oversized duffel bag of clothes, and one small box (NOT moving sized) of stereo, books, gameboy, CDs, and we had several bags of items for Goodwill.
And the best part is – there wasn’t an argument. 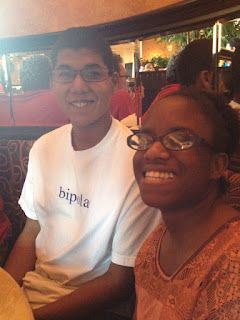 Tim and The Girl (and the back of Tom’s head in the mirror) at the Cheesecake Factory
We had a nice rest of the weekend, hanging out with all three kids, which is a rarity.  Tim’s been at the new RTC for nearly 2 weeks now, and we’ve talked to him on the phone five or six nights.  He has started summer school and is excited to study tornados.  He gets to cook and he’s learning to make new dinner meals.  Today they will spend the day fishing on the lake.  He sounds happy, he says his symptoms are very minor, and for that, I am very, very grateful.  RTC rules state he can’t leave the  grounds for 30 days while he acclimates, so we are going to go visit  him this Sunday.  The intention of moving him to this new RTC was for this to be a transition over the next 8-12 months to bringing him home.  It’s too early to declare victory, but so far, he’s handling this transition well.  Here’s to hoping for a smooth summer!

Does your Child Have An ICG Grant?