It was Tim’s first birthday when we realized something wasn’t quite right.  We couldn’t put our finger on it, but sitting in a high chair, screaming at the group of friends and relatives surrounding him, terrified by the single candle on his cake, wrists and ankles turning frantically, we knew he was different.  It would be 10 years, four therapists, two psychiatrists, six diagnoses, a dozen IEP meetings, two neurologists and one 45-day hospital stay later before anyone ever said the word “schizophrenia” to us.  Probably the best thing that happened to Michael and Susan Schofield is that they only waited half that long before a doctor said it about their child. 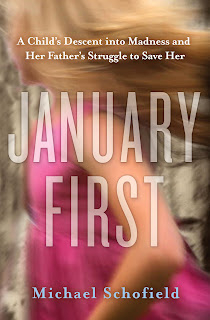 Michael Schofield has written a book about those first years with their daughter, Jani, entitled “January First.”  A few disclaimers here before my review: Crown Books, the publisher, sent me a free copy to read and review here on my blog.  Also, I “know” Michael Schofield, sort of.  When a story about Jani was published in the Los Angeles Times, a friend emailed me the link to it, and I contacted Michael via email.  We emailed back and forth a lot for a few years, and I was, at one time, a member of his Yahoo support group.  Michael and I don’t always see eye to eye on treatment options for Childhood Onset Schizophrenia, and we both have strong personalities and speak our minds.  But I feel safe in saying we have many of the same friends in this wierd fraternity of Parents Like Us, and we respect each other, even when we don’t agree.  Ok – disclaimers over.  On to the review!

The book chronicles the Schofield’s journey to first understand then try and find help for their daughter, January (Jani), from age four to just shy of age seven. Jani was – is – an extremely intelligent, extremely verbal child. As such, it is easy for her parents, doctors, and teachers to consider her facination with numbers and her amazing collection of “imaginary” friends as the side effect of genius. But when her brother, Bhodi, is born, Jani erupts into violence directed at this helpless infant, often at the direction of,  she says, her menagerie of rats named after days of the week and a precocious cat she calls 400. It is apparent that she sees these creatures, all inhabitants of a mystical isle off the coast of California she calls Calalini.  It is also apparent that Jani can never be left alone with her baby brother, even for a second.

And so it begins.  A parade of doctors are consulted in an effort to understand Jani’s strange world and her compulsion to harm her brother. Along the way the Schofields enounter the same clowns in professisonal garb many parents like us have encountered – the one that says she’s being coddled and not disciplined; the one that says she has anxiety; the one that reports her as abused. Through it all Michael struggles to hold down a job, Susan loses hers, they start med trials on a four year old, and they go behind each other’s backs to both  avoid and push hospitalization for answers.  By the time Jani is six-and-a-half she’s been hospitalized four times and they have made the decision to live in two apartments in the same complex to keep Bhodi safe from Jani. And they have a diagnosis from UCLA.

Michael has been writing a blog for a number of years, and I have read every post he’s ever written.  I have to say, this book is a far cry from his blog.  Michael’s blog posts are a pleasure to read, full of raw emotion and elegant prose.  The book reads more like a clinical account of the proceedings.  Even the emotions that Susan and Michael had to live through sound more like a third party account of what transpired. Knowing what I know about Jani and Michael and Susan, I was sad to see the rawness of Michael’s writing style sanitized, I have to assume, by editing.

The book ends in Summer 2009, just shy of Jani’s seventh birthday, with the Schofields living in two, one-bedroom apartments, armed with an official diagnosis and a lot of what-ifs.  Today, Jani has recently celebrated her tenth birthday and the Schofields are again able to live under one roof. The what-ifs haven’t subsided. Michael notes in the epilogue that having a child with Schizophrenia isn’t about helping her learn to live a beautiful life; it’s about trying to string together a series of beautiful days. I can absolutely relate. In the past month Tim’s days have vaccilated between building a boat for a cardboard boat regatta, running from class and punching a steel door at the direction of his auditory hallucinations, and wrapping a plastic bag around his head, screaming that he wants to die. One day at a time isn’t a 12-stepping mantra for the  Parents Like Us club, it’s a necessity for surviving with even a portion of our psyches intact.

As a parent nearly 10 years farther down this journey than the Schofields, I have to imagine there is a sequel festering in the wings.  Jani has yet to begin puberty. When the hormones of the tween years kick in, all hell breaks loose. Meds that were working no longer have any impact. Behaviors that seemed to be past rear up in triplicate. Social awkwardness gets stood on its head as the rift between the child with the mental illness and his/her neurotypical peers is no longer ignored or avoided, but is instead mocked and bullied. If I have one piece of advice for the Schofields, it’s brace yourself. The next decade will in all likelihood make the last one look like a cakewalk. I hope I’m wrong.  But this is 28 different med combinations, 12 hospitalizations, five different therapeutic day schools, four DCFS investigations, and two long-term residential treatment stays since the age of 11 talking. But the Schofields had a great head start that we didn’t have. I envy that in a bizarre way the Parents Like Us club will probably understand.

A Strange Sigh of Relief