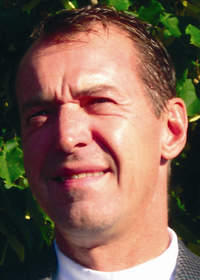 I couldn’t bring myself to wear pantyhose today.

I just got home from saying goodbye to a friend I’ve had for nearly 17 years. A friend I’ve shared a lot of good and bad news with, good and bad times with. A friend who was so unhappy and depressed that he thought his best option was to take his own life and leave his friends and family and wife and children behind.

We met at work, all those years ago, and we disliked each other immediately, mostly because we were both ambitious smart-asses. We managed opposite sides of the same business unit and we were constantly bickering over who was really in charge. After a month or two of that, we realized the other was worth knowing. Worth spending time with. Worth listening to.

We worked together for six years. During that time we had business success, yes, but we also started sharing our personal lives. He celebrated with us when we brought Tim home from the hospital. He was there when we adopted our daughter. I talked to him through his giddy excitement when he realized his girlfriend was The One. I laughed at him taking his dog to a therapist when he thought the dog was jealous of his new wife. We went on business trips and worked trade shows together. Then I quit and moved away, but we still kept in touch by phone and email and Christmas card.

By happenstance, five years ago, we both moved to the same city. We picked up where we left off, and shared barbeques and restaurant recommendations again. Our children played together. I lost a job, and he was my reference. I found a job, and hired him when he lost his. We traveled together again, like the old days.

There are a lot of silly stories about all those business trips. I always liked traveling with him on business trips becuase there was no pressure. We had dinner together after long days with clients. We’d call our spouses at the table and say “hi” to each others before dissecting the trip and the client.

Once, he noticed as we were walking into a client’s office, that I wasn’t wearing pantyhose. He was wearing a tie, and smarted off that if he had to wear a tie, why didn’t I have to wear hose? I explained my philosophy to him. I hate pantyhose. HATE. More than anything but lima beans. So I decided long ago that I would only wear hose on two monumental life events – someone’s wedding, or someone’s funeral. He thought that was hysterical.

There are a lot funnier stories about things that have happened to us or things we’ve done over the past 17 years, but that’s the story that stays in my head today. Probably because I can’t believe it. I can’t believe I didn’t realize how distraught he was. Me – of all people. Why didn’t I listen harder? Why couldn’t I tell? Nothing makes sense right now. I can’t believe I was at a funeral today. His funeral. I don’t understand why he made that choice. Why he’s gone. So I didn’t wear them. I couldn’t. I’m not ready to admit this is a monumental event in his – or my – life. No hose.